here are some hints and informations about The Breach (Event) queue 🙂

Stage 1: Engaging the City Ship and destroy Hard Points
Move in and shoot at Hardpoints. To beat all the Hard Points as fast as possible you could start your attack run 30 seconds after each other to let them respawn. If you want to speed things up, the first person could just speed to the Breach Point as fast as possible. A Cloak could be very very helpful for that tactic.

Stage 2: Destroy the Subpower Core
In this room you should rescue the 3 Allied Ships first. If you enter the room there is one directly infront of you, one on the left side behind the Subpower Core and one on the far right side. If you wanna speed things up, split up there. To rescue them you need ONLY!! to interact with them. You could do that even if the enemies shoot at you and there is no activation time or something like that.
After the successful rescue you need to engage the Subpower Core. Open the Power Relay (interact)  to make the Core attackable. But be careful, the Core jumps around and there could be a fake Subpower Core. You could identify the fake Core by its ? at the end of the name. It looks like this: 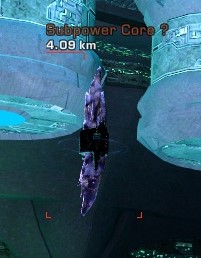 If you kill that one (try not to do it 😉 ), you will trigger an AoE Dot effect. You could remove that one by using Hazard Emitter. Try not to be too close to the core or you get crushed from the Power Relay 😉

Stage 3: Destroy the Central Power Core
Move into the room. The Core is rotating and protected from 2 sides by a shield making it in these two arcs invincible. Attack only from the other sides and try to stay there. Mostly (depending on your ship speed) you will need around half throttle to stay there. In these non-shielded areas, the core emmits several Lightnings dealing heavy damage, stay out of the Lightning! In addition it could teleport you around, you could see it when you’re targeted by some green Tractor Beams. Kill the Core 🙂

Stage 4: Escape
Escape the detonating ship by flying the same way out you came in. It’s marked by the explosions :).

Have fun with this Queue 🙂
In case we missed something, feel free to mention it under this post 🙂

3 comments to The Breach (Event) – Guide