A brief guide to getting the most out of Hangar Pets 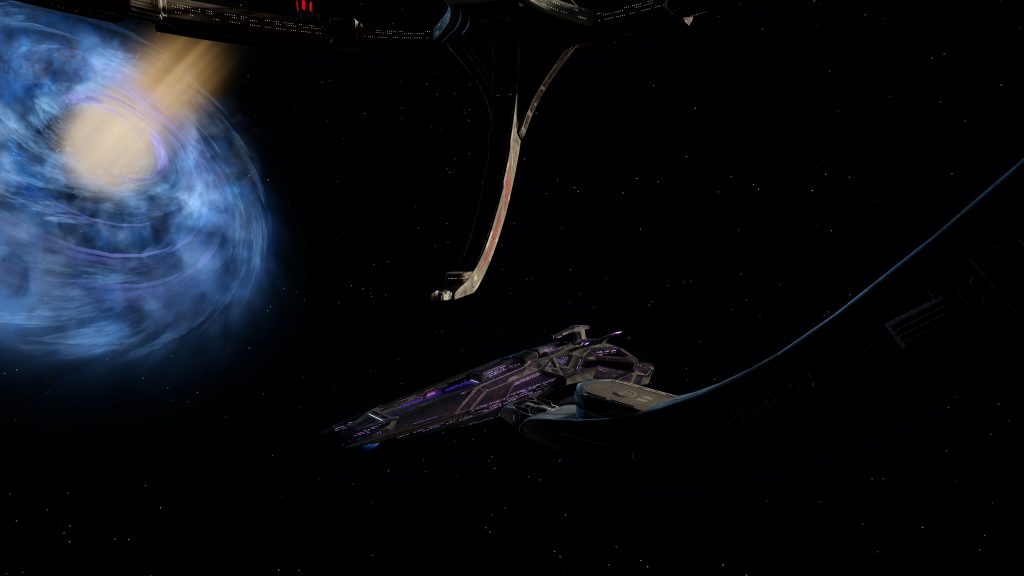 Hangar pets are often overlooked being seen as a bonus launch and forget secondary or even tertiary damage source. On some ships and with the right combinations hangar pets can add a reasonable amount to your overall DPS. Pushed far enough it is possible to get over 100k DPS from pets alone, although that could be argued to be suboptimal as you will be sacrificing other better areas which overall would give you more DPS.

To get the most out of pets one of the first choices is the skill tree. There isn’t much to talk about here you will want

The next source of damage I like to look at comes from Doffs and there are two main ways to do this. The cheapest way is to get x3 Flight Deck Officers with increase 10% hangar pet damage per doff when in Escort Mode. While suboptimal this is cheap and a good starting point if you are new to Carrier builds. Its a good way to get a feel for the build before investing in more expensive options.  It’s also worth noting this is more for a themed hangar build as damage gained will be less then what you could get from doffs that help your main weapons. Along with Hangar pets attacked less efficiency when set to Escort Mode.

My preferred way although it costs a lot more, is to get the Scrambled Fighter Starship Trait with x3 Flight Deck Officers that lower Hangar Bays recharge by 4 seconds. Combine this on a Carrier with Quick Deployment Starship Mastery for an extra 20% and high Aux power if you can spare it to knock more time off. Now set the Hangar Bays to Auto launch. Depending on the pet used this can lower the bay recharge down to as little as 1 second (Lost Souls of Gre’thor) Most fighters bay recharge can be lowered down to 4 or 5 seconds if you have two bays and enough Aux Power.

This method has a number of advantages; you are not limited to Escort Mode, the hangar pets are self-healing by 50% hull every few seconds, there is a 5 second damage immune for pets with a 15 second lockout.

Running at approx 110 Aux with Lost Souls of Gre’thor the fastest launch speeds pets, will gain a 125% damage bonus. 95% better then the Escort Doff method. With the slower launch fighters like Jem’Hadar fighters or Scorpion’s you can still get 2 stacks (*) for a 50% damage bonus.

The above method with Frigate pets makes them surprising tough tanks. They tend to survive most fights and due to surviving reach and stay at rank 5 further boosting damage.

(*) I have not worked out the minimum aux you can get away with and the minimum depends on the hangar pet base recharge. I did try 155 Aux which wasn’t enough to get the recharge fast enough for 3 stacks with Scramble Fighters.

*Don’t worry if your carrier cannot fit Gravity well it isn’t essential but it will help boost Hangar Pet DPS when SAD is triggered into a group.
* An alternative variation is to drop Dominion Coordination and replace Rapid Fire with Scatter Volley. If you keep between a 5 and 10 second delay between activating FaW and Scatter Volley and have some bridge Officer cooldowns reducation. Then you can keep SAD running at a 100% uptime which more then makes up for the 33% damage lost from losing Dominion Coordination. Its a little more tricky to get the timings right, but it will give better performance.
* The 3 part Iconian Resistance set has 5% chance to give team and pets 10% energy weapon damage. The 4 part set gives the team and pets 33% all damage with a 2 min cooldown. It is possbile to fit the Ancient Obelisk Technology Set with the 3 part Iconian Resistance set. This gives a smaller damage boost 13.3% to pets but you can keep the damage boost active for longer. Alternatively if you prefer less pet DPS and more tanky pets look at the mixing in 1 or 3 parts of the Lukari Restoration Initiative Regenerative Shield Array set.

In the case of Lost Souls they cannot make use of Rapid or Overlord so skip Coordinated Assault. Dominion Coordination though stacks with Scrambled Fighters for a total of 155% damage boost to Lost Souls.

For a long time I ran this trait set on a Jem’Hadar Dreadnought Carrier with Attack Ships which gain both Rapid fire and Beam Overload.

Starship Trait set option 2: Scrabbled Fighters + Superior Area Denial
Option 2 works well with energy builds as Superior Area Denial trait supports your main weapons better. This grants Fire At Will 1 and Scatter Volley 1 to hangar pets when you activate Fire at Will or Scatter Volley along with giving your main ships energy weapons a none stacking with itself -30% damage resistance. As before you don’t need an energy weapon fitted to trigger this trait and due to global cooldown it works out better to fit FaW alongside Scatter Volley so you can keep SAD running 100% of the time. Double Scatter Volley or Double FaW will run into global cooldown problems.

StarshipTrait set option 3: Scrabbled Fighters + Fiery Entrance +  your preferred Traits from option 1 or 2.
This works best on Exotic builds as the Fire nova damage is boosted by Exotic. It works even better with Lost Souls and max hangar recharge builds. Every time you use Narrow Sensor Bands or Launch a Hangar pet your ship fires a short range ring of fire around your ship. With max hangar bay recharge the Lost Souls will cause a ring of fire around about twice every second. That’s approx 20 attacks over 10 seconds with hits multiplied by the amount of ship in range. If you stack into into Exotic and fly point blank range into a Gravity Well the Fire Nova damage can multiply up fast in big groups. It’s a bit of a specialty build but if you fancy something different it works.

StarshipTrait set option 4: Fleet Support + Superior Command Frequency + Captain Recharge Traits (Relaunch and Repair, All Hands on Deck, Intelligence Agent Attaché) is surprisingly effective. If you are going for max DPS it might not be the best choice over traits that boost your main weapons. If you want a Carrier theme build I have managed to get an 3 battleships and 3 Frigates out at once doing a surprising amount of DPS and they last a long time.  Depending on ISE run I get around 20k to 30k extra DPS from these pets.

Please note before you buy all these traits. I have not done testing on the optimal level of recharge. You might not need all 3 recharge traits. If anyone has tested please leave comments in chat below.

Further expanding on this Obedience is Victory. This is only worth it for full Carrier Themes. The only time I use this is when trying to maximise my pet DPS at the cost of losing total DPS. The attack ship is very fragile but if we managed to keep it alive, it gets me around 4k DPS to 8k DPS. In a perfect run the traits in this section have given me a total of 40k DPS extra. I only really run this combo when trying to see just how far pet DPS can be pushed at the expense of losing total DPS.

Starship trait: Relaunch and Repair:  The 5% recharge on captain abilities is effectively 10% every 5 seconds with double bays on a fast bay recharge. Works well with Relocate Mines and other powers. The 25% health Regen to self and hangar pets is not that useful.

Starship trait: Voth Carrier Synergies. When running fast hangar recharge with Scrambled Fighters this is unlikely to be needed but if you really want hard to kill pets add it in. Engineering ability’s grant you 10% hull healing to yourselves for 15 second. All pets gain an Immunity Shield for 15 seconds.

Lastly Tactical Boff ability give 10% all damage to yourself for 15seconds and Enable Aceton mode on all pets for 15seconds.

Starship trait: Hivebearer: When launching a hangar pet or when hangar pet dies: Spawns a Hur’q Swarmer for 30 seconds (max 8 Swarmers at a time). Worth considering only as a NPC distraction as I have not had the best performance out of them and if your hangar bay recharge it too fast they will bug out. With Lost Souls on a max Hangar Bay recharge build the Swarmer’s will do zero damage due to respawning to fast. If your recharge is over 5 seconds these should work. Note: Even on slower recharge bays the DPS I have recorded from these is tiny. They are only good as a distraction for NPC’s to kill. The same goes for Hive Defenses which is in personal traits.

Starship Trait: Target That Explosion Fun but not really that effective from a DPS point of view. Up to 5 nearby allies launch a torpedo at the target when you use any Torpedo or Command bridge officer ability.

Personal Trait: Wing Commander makes the pets level up faster taking half the normal time to reach rank 5.  Without this boost pets need to be in combat for 5 minutes to hit rank 5. The rank bonus depends on the type of pet.

Personal Trait: Holographic Mirage Decoys Not really essential as pets are already tough enough with Scrambled Fighters. But if do not yet have that trait or like me you use mines this has a nice bonus of helping keep hangar pets alive a little.

There are a number of universal consoles that summon pets. Personally I wouldn’t use most of these unless building towards a full carrier theme over performance.

Notes: None of the damage numbers above factor in damage boosts for hangar pets ranking up in combat. A fully ranked up Lost Soul with max stacks of Scrambled Fighters and Coordinated Assault would hit 165% damage boost. You could add Dampen Energy Signatures starship trait for a further 5% if your really want to maximise pet damage over max DPS.

Update: 27th Sep 2020
A lot of people have asked what is the best pet. This is a difficult question as the best pet changes based on content being played, powers being used, traits fitted and ship being used.

DPS Comparison of various hangar pets including Squads VS Singles

This is not a compete list just what I personally use and consider top tier pets. Drone Ships, Lost Souls, All Squadrons, all 3 Xindi pets. On the Fed side if you have access to the SAD trait the best generic fits on all ships DPS pets you can fit are Scorpions squadrons blue version. If you do not have SAD trait then I would go for the Mirror Shuttle or Aeon Time ship.