Science Ships in the Current Century 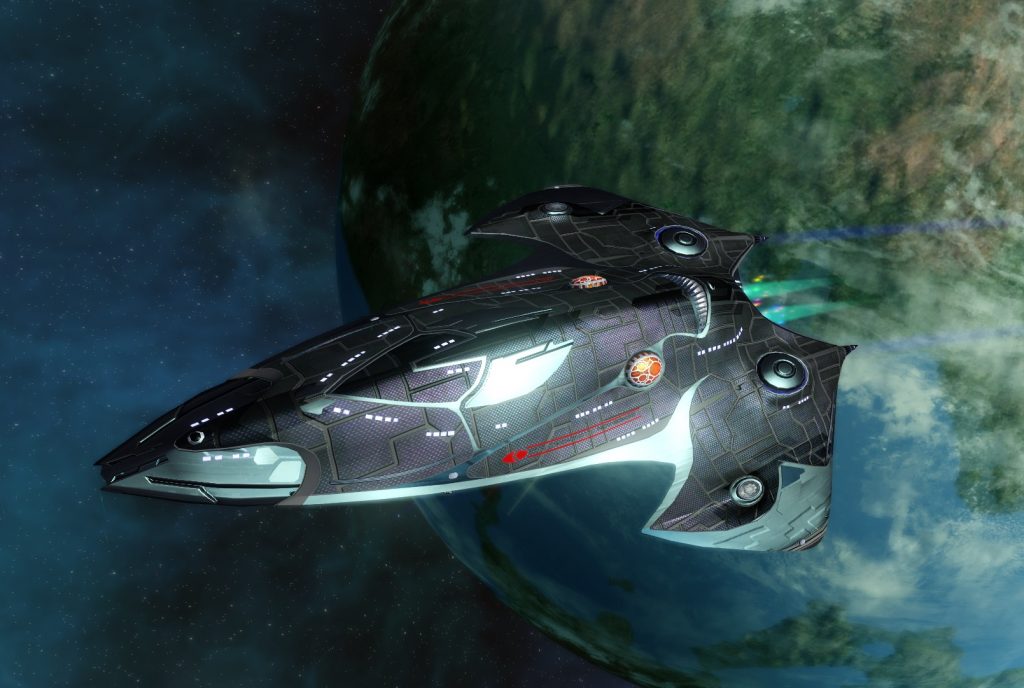 Due to the high demand for science ship builds, here is a brief overview of what is currently en vogue. One fair warning: only read on and recreate one of the builds if you want to invest hundreds of millions of energy credits, piles of Lobi and thousands of Zen.

Science ships are able to dish out incredible amounts of damage to groups, especially in elite queues.  Unlike cruisers or escorts their main sources of damage are:

The following builds are based exactly on this order.

Captain class
A common mistake is to link the captain’s profession to the class of the ships when it comes to terms of maximum efficiency. This might work in other MMOs, but in STO it’s Tactical > rest. So if you want to create an EPG build from scratch, choose Tac for your character. I’d use an alien Romulan. 10 personal trait slots and 5 (cheap) bridge officers with the superior operative trait. Choose a Fed alien for the better-looking ship or a KDF alien if you want to save some hundred million ECs. Want to play a Sci captain? Why not. Eng? Better not, this class currently gets most out of direct energy builds.

We use 27 points in Tac, so you can choose all but 3 skill nodes. Since we’ll focus on torpedo weapons, your energy weapons are more or less for the set bonuses, traits, and procs. I’d skip the last point for them and add one to defensive Maneuvering which adds a little to your defense which might be useful if you stand still. If you think you need every bit of energy damage, get Advanced Weapon Training instead. The only other selection we make on the Lieutenant level is Advanced Hull Capacity. We need hull points for Tyler’s Duality.

The picks for the LtC level are pretty obvious. We need some points for Tac and all the nice Sci stuff we can get. Unlike builds with energy weapons, we don’t need EPS here. I like fast ships, so all in impulse speed. If you don’t need that, put 3 points in something you like (i.e. Long Range Targeting, Shield Resistance, etc.)

On the Commander level, we take the Tac stuff and add a single point to Hull Plating. Our sole concession to damage resistance.

Captain skills are pretty simple, too. All Tac, maximum EPG for Sci, and energy for our subsystems. Offensive subsystem tuning isn’t necessary, you may put it into Improved Warp Core Potential.

Temporal Operative as primary gets us +50 EPG, Continuity, and a lot of useful other buffs. Strategist is the recommended secondary spec.

The best science ship you can get your hands on at the moment is the Verne Temporal Science Vessel. It offers the unique combination of a great bridge officer layout and one of the best universal consoles for EPG builds. Don’t stop spending ECs right there, also get the Aeon Timeship for the best-looking skin. For KDF it’s the Qul’poH, Romulans choose the Sui’Mor. Bad news, no Aeon skin for them.
If you don’t want to spend your money on an infinity price ship, take the Lukari Dranuur Scout Ship. It’s cheap, has raider flanking, and a great BO setup. But sadly no backstep console.

The traits are the reason why EPG ships perform so well in today’s metagame. I recommend getting these four traits as a basis for your builds. Two of them are C-Store and two come from ships that are available in the Lobi store and thus quite cheap on the exchange in comparison to a lockbox or promo ship.

For explanation: Three of those traits buff your exotic damage. That includes bridge officer abilities, stuff that consoles do, and secondary effects/procs from your weapons and your secondary deflector. SIA is an almost broken ability if used correctly. IPO also helps your cooldown management.

Depending on your budget or build pick two of these highly recommended traits:

Here we have all the nice ones we use on our energy builds plus some dedicated to EPG stuff.

Recommended and/or race and profession-specific

In general, we recommend DOFFs that increase your exotic damage and CrtH & CrtD

This setup is preferred for missions where you actually move around

Consoles
We had some nice additions lately for our science ships which makes it even harder to find the perfect combination. At least we got an additional console slot with the T6-X upgrades.
Here’s a list of useful consoles:

Alternatives which are  quite ok:

So, in the end, the ship should look like this. Remember that these are sample builds. You should adjust the setup for ISA / ISE / HSE or whatever mission you want to play. 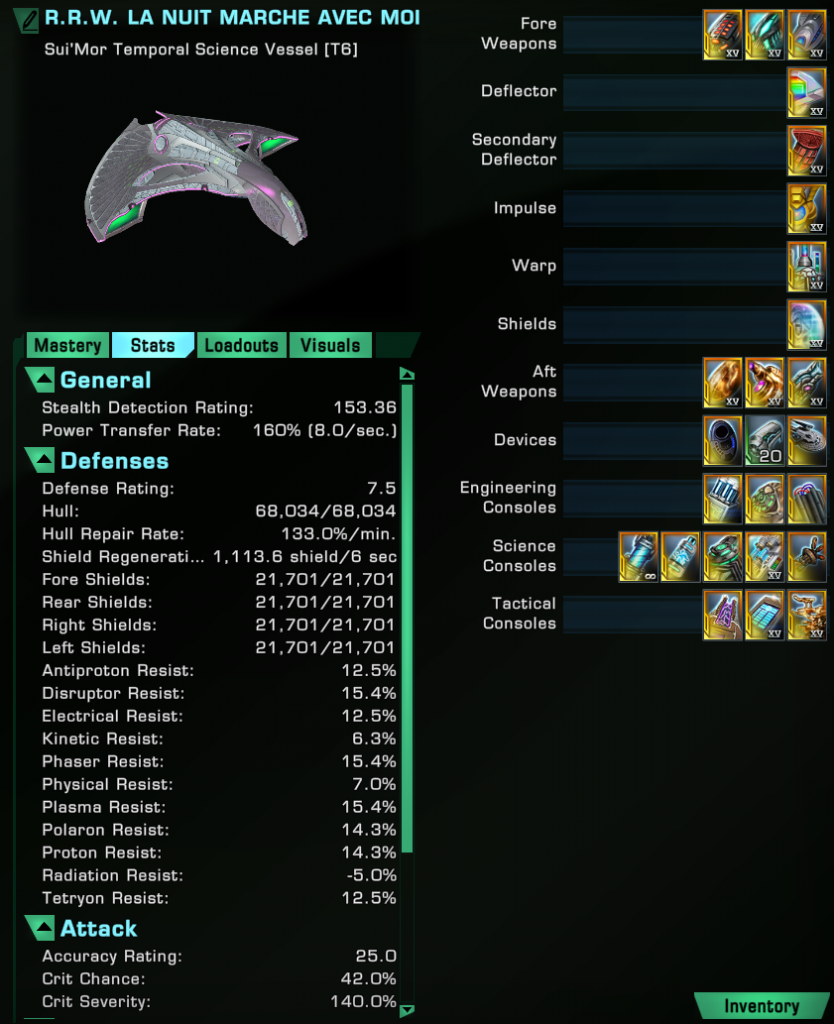 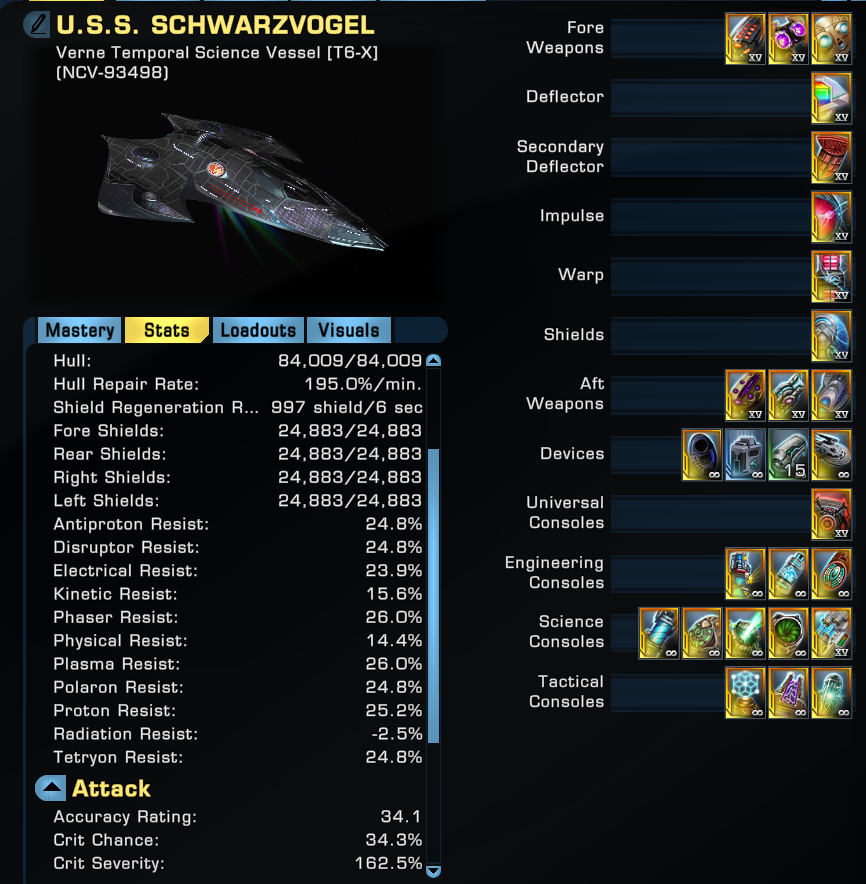 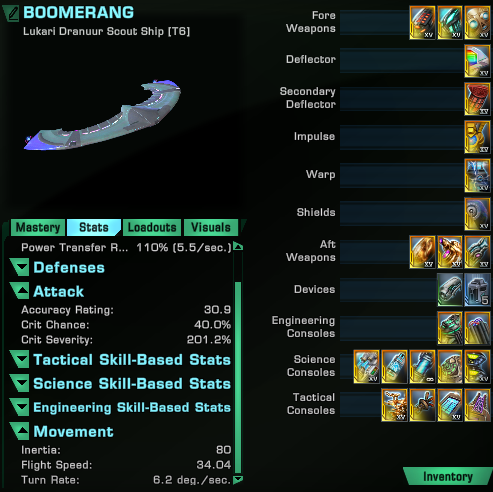 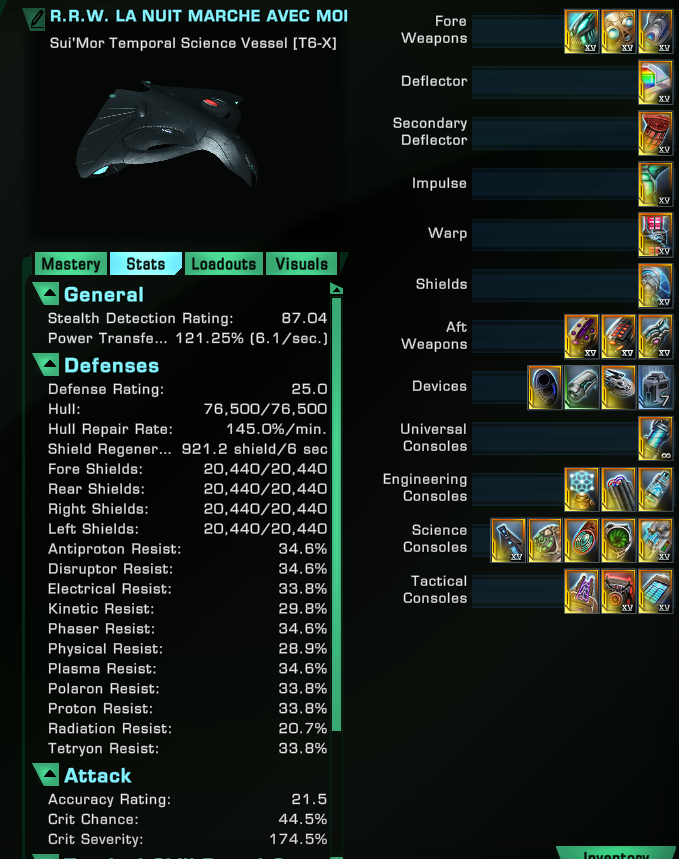 Non-Romulan captains can purchase superior operatives at the fleet’s embassy.

Sample build 1:
This is one way to set up the skills. This build uses ETM and profits from the Morphogenic Set. 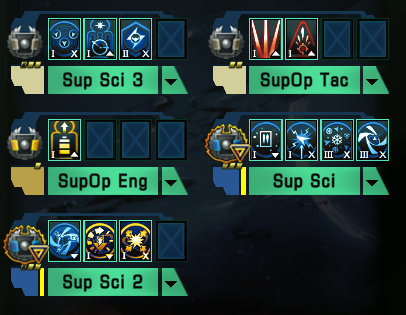 We use just one engineering skill (Emergency Power to Auxiliary) for the Doff(s) and Assimilated Power Conduits. Fire at Will and Scatter Volley trigger ETW.

This means we can use 11 different science or temporal abilities for total destruction. Let’s see how it actually works. We can divide these skills into 4 categories: Anomalies, triggers for the secondary deflector, pure damage, and utility.
The only one that falls in the last category is Photonic Officer. We need it for buffing, cooldown management and to trigger SIA. Anomalies are skills that have a lasting AoE effect. Gravity Well is pretty obvious. As is Subspace Vortex, Chronometric Inversion Field and Timeline Collapse. Oddly enough Very Cold in Space is also an anomaly.
The secondary deflector is triggered by Destabilizing Resonance Beam, Charged Particle Burst, and Structural Analysis.
Delayed Overload Cascade is an awesome damage ability but has to be timed correctly. Only use it if you’re absolutely sure that it will destroy all those pesky targets. Otherwise, you’ll have Borg Spheres flying around everywhere.

You may also use Recursive Shearing which is a great single target damage ability, i.e. for the final Tac cube in ISE. Feel free to play around with the skills, Delayed Overload Cascade III is also definitely worth a try.

Playing with this build is pretty simple. Fly to a group of enemies and activate your abilities until they are gone:

Learn how many abilities are actually needed to kill a group of enemies. Don’t waste your active console abilities on NPCs with low HPs. Watch your cooldowns. Sometimes it’s a good idea to leave out one temporal ability at the start for 46 of 47’s ability. Time your Temporal Backstep wisely.

And don’t forget to select

This build doesn’t use any tactical bridge officers at all and relies solely on SIA, active console abilities, and of course science and temporal officer skills. 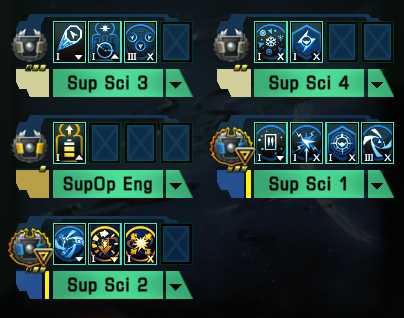 Photonic Shockwave triggers Kick. The tractor beam is for triggering the Intelligence Agent Attaché trait. This build works quite similarly to the first setup. Spam abilities and console abilities. So much fun. If you use this build, try to find a good mix of + Exotic Damage and + Exotic Bonus Damage consoles.

It’s not a bright idea to use an all-in-one bind for the space bar with these builds. At least not for your Sci abilities. But you may bind all those skills to one key that you want to run all the time, i.e. Photonic Officer, EPtA, FAW, and CSV.

Personally, I find it very convenient to have the skills sorted bound to keys.

I.e. you could map Timeline Collapse and Chronometric Inversion Field to one key, in this case, they are in row 2 and 3

Or you create your own activation order and map those skills to keys 1, 2, 3, … this makes it easier to hit the right one instead of clicking frantically with your mouse.

Join the veterans and experts on our Discord: Click me! Select EPG as your role and join the subchannel!

110 comments to Science Ships in the Current Century