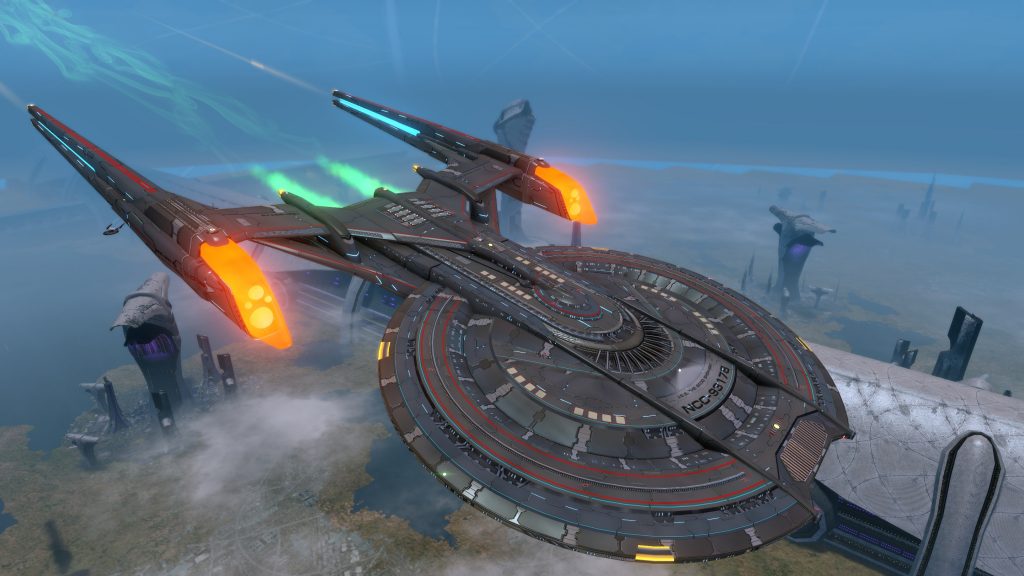 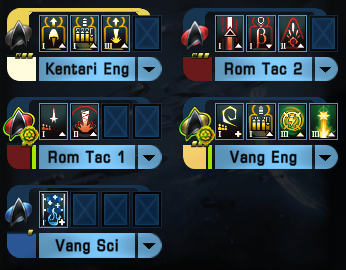 Switching the LtC Universal to Engineering makes it possible to use EPtW3 and two of the best miracle worker abilities, Narrow Sensor Bands (NSB) 3 and Mixed Armaments Synergies (MAS) 3. This layout is very similar to what we use on the Vadwaaur Juggernaut or Jem’hadar Warship, but sadly cruisers don’t have a commander tactical. If you want to make your ship a bit more tanky, use EPtS instead of EPtE. You should replace Beam Overload with FAW when using Superior Area Denial as one of your starship traits. 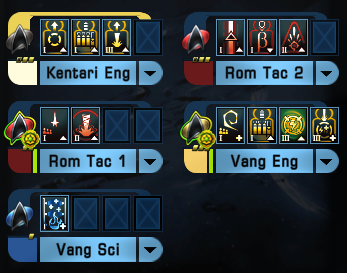 This build definitely is a tankier version for missions like HSE or if you’re struggling to survive. Sadly there’s no place left for Mixed Armaments, so you should switch the omni-beam for a turret on the Phaser build (see below).  Reverse Shield Polarity 3 plus a matching fabrication duty officer will net you 28 seconds of invincibility (almost, never park in warp core breaches).

Here’s my personal list of useful space traits for energy weapon builds.  There are some good traits which I’d slot in certain missions like the Maru event, but this list is about daily DPS stuff.

Very useful:
– Hive Defence
– Fluidic Cocoon (only if you actually get hit by torps)
– Point Blank Shot
– Give Your All (dodge damage)

Situationally good:
– Superior Accurate (if your Acc is quite low)
– Repair Crews (if you need more survivability)
– Maquis Tactics (great for Warbirds)
– Anchored (only if you’re not flying around)
– Deft Cannoneer (only if you have problems with sliding around)

I highly recommend the following traits:

and 3 of those:
– Weapon Emitter Overdrive (from the Juggernaut… if you own it, you’ll use that ship anyway)
– Cold-Hearted (always useful)
– Superior Area Denial (same)
– Vaulting Ambition (from the Styx)
– Promise of Ferocity
– Calm Before the Storm
– Improved Critical Systems

Since all of the featured builds use Aux2Battery as their mechanic for cooldown reduction, three technicians (Aux2Bat variant) are mandatory. Use at least 2 very rare ones and one rare to get the maximum uptime.
Don’t forget to use your skills first, then activate Aux2Bat to reduce the cooldowns.

This leaves us with 3 open positions. Some suggestions:
– Energy Weapon Officers for additional CrtD and / or CrtH
Quite expensive if you want to buy the ones with 4% chance. But blue ones will do, too. I’d take both.
– Fabrication Engineer to extend RSP’s duration.
The vr one will add 8 seconds. Only use one if you actually slot RSP.
– Agent Nerul / Ayal
This doff comes from the Delta Operation Pack and causes your Attack Pattern Beta power to restore a small portion of your hull when firing energy weapons. Not too bad to have an additional heal.
– Emergency Con Hologram
From the Phoenix box. Lowers Evasive Maneuver’s CD by 85% when you use EPtE. Use him to get more speed. Don’t use him, if your build just has EPtS/EPtW.

There are a few others that may be useful, but these are the ones that are found in almost all DPS ships.

And don’t forget to use Neal Falconer and Eldar Malik’tan in your ground roster. These special unlocks also increase ‘space damage’.

Here’s the Phaser build. There’s no real surprise, we use all the cool stuff this energy type has to offer. Terran Taskforce Phaser DHC, Phaser Quad cannon, a sensor-linked DC and a wide-arc DHC plus the Prolonged Engagement DC. If you don’t have one or more of the ‘special’ cannons, use some sensor-linked or crafted dual cannon instead. The rear weapons are mostly for set-bonuses, gamma-reputation and counter-command turret, Trilithium Omni.
Deflector / Engine / Warpcore and Shields are well known: Elite Fleet Intervention Protomatter Deflector Array from the colony (I use  [ColCrit] [EPG] [HullCap] [Sh/HullCap] [ShCap] as mods), Prevailing Fortified or Innervated Impulse Engines plus Prevailing Innervated Resilient Shield Array and the good old Elite Fleet Plasma-Integrated Warp Core from the Spire (Mods: [AMP] [ECap] [Eff] [SSS] [W->A] [W->S] ).

The console setup is pretty easy to guess, 4 Vulnerability Locators (Phaser), the 3 matching set consoles for the rear weapons. The C-C Multi-Conduit Relay also boosts kemocite-laced weapons, Ordnance Accelerators adds 36.3% to Phaser damage and the Reinforced Armaments boosts EPS, hull cap and regeneration. The Dynamic Power Redistributor Module is probably the best Heal / Damage console in the game, sadly also quite expensive for Federation captains. D.O.M.I.N.O. is just great for all energy weapon builds, even better for Phasers as it adds another +15% to this weapon type. Bioneural Infusion Circuits is the best Lobi console, Tachyokinetic Converter is useful to buff your turn rate and adds CrtH and CrtD as does the Assimilated Module.

In case you can’t afford the expensive Lobi consoles or weren’t around for D.O.M.I.N.O. you could use
– a second console from the Synergistic Retrofitting Set
– the cheap Approaching Agony (+15% Phaser, 1,5% CrtH)
– Temporal Trajectory Shifter (50% Haste for max. 15s)
– M6 Computer (Haste, All Damage, Accuracy)
– Magnetohydrodynamic Fusion Expulsion (+15% Phaser damage)
– instead of the Multi-Conduit slot a 5th Locator and add the Hydrodynamic for the 2 piece set
or something for your survivability like the Protomatter Field Projector (for the space-poor also a good replacement for the DPRM) or Regenerative Integrity Field. 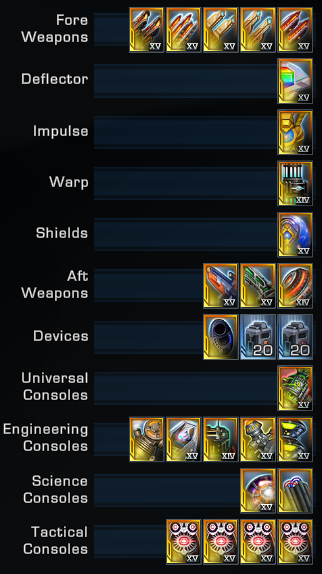 The Spiral Waves are awesome weapons, if you don’t own them, use sensor-linked, coalition or crafted disruptors. 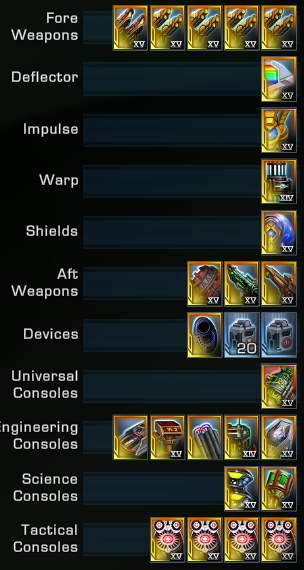 And now to a sample build using Disruptors. Any energy type will work, though. 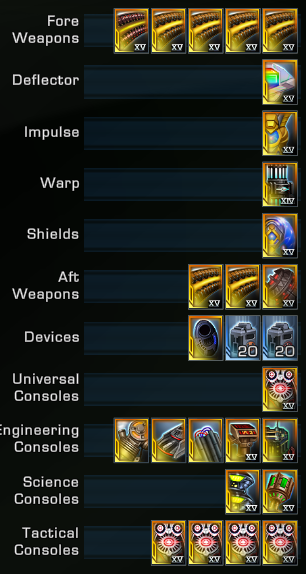 Besides equipping beams this build is almost identical to the cannon one. Terran Taskforce, six Spiral Waves and the Martok Omni as weapons, same gear as mentioned above.

If you don’t own the DPRM or Point Defence, take a different one from the set. No Domino? Use Timeline Stabilizer or M6 Computer. Spiral Waves are too expensive? Try sensor-linked, Coalition, crafted ones. Or just use the T6 Romulan Rep. Disruptor beam plus Zeropoint console. 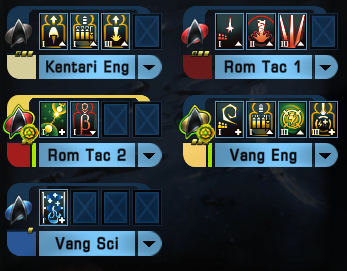 Bridge Officer skills are slightly different, too. No MAS here, if you want to use that skill, you should run the complete Nausicaan Set and use something like the Polaron Build below. But having RSP 3 is awesome.

A slightly different build for the friends of Polaron weapons. This one is quite similar to the one I’m using on the Vadwauur Juggernaut. It uses canons, beams and a torpedo, all you need for a true miracle worker build.

Same Engine, Deflector, Warpcore and Shield as above. Consoles are four Polaron Locators from the Spire, Morphogenic Matrix Controller, Piezo-Electric Focuser (Lukari 2 part set bonus).  D.O.M.I.N.O., Gamma Rep console, BIC, Assimilated Module, DPRM. Nothing really exotic. I wish we could also use the Chronometric Capacitor, but it’s a tactical console and a Locator is still better. Supercharged SIF Conduits acts as a placeholder, you can take one of the other universal consoles I mentioned above, Tachyokinetic, RIF, Protomatter Field, M6, Timeline, whatever. 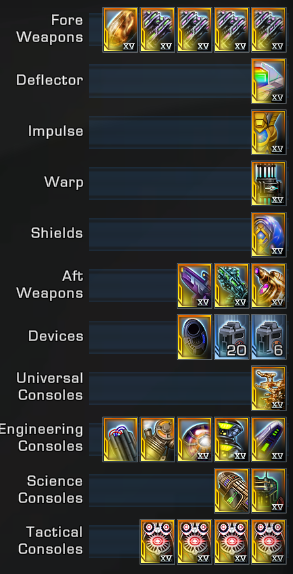 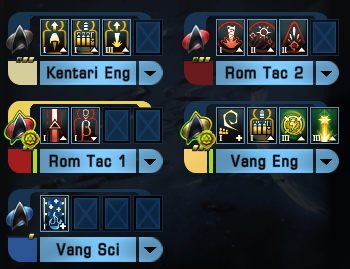 Pro tip: In the WFP phase, stack your buffs for the Hyperactive Morphogenic Enhancements buffs and start with +6% CrtH, +30% CrtD and +22.5% weapon damage.

There’s not much you can do to add more survivability besides changing EPtE to EPtS or adding a defensive console.

The traits for this build are just slightly different:
– Super Charged Weapons
– Emergency Weapon Cycle
– Withering Barrage
and 2 of those:
– Weapon Emitter Overdrive (from Juggernaut… if you own it, use it)
– Cold-Hearted (always useful)
– Superior Area Denial (same)
– Vaulting Ambition (from the Styx, very good vs. enemies with high HP)
– Promise of Ferocity
– Calm Before the Storm
– Improved Critical Systems

Same personal space and space reputation traits as the cannon builds above.