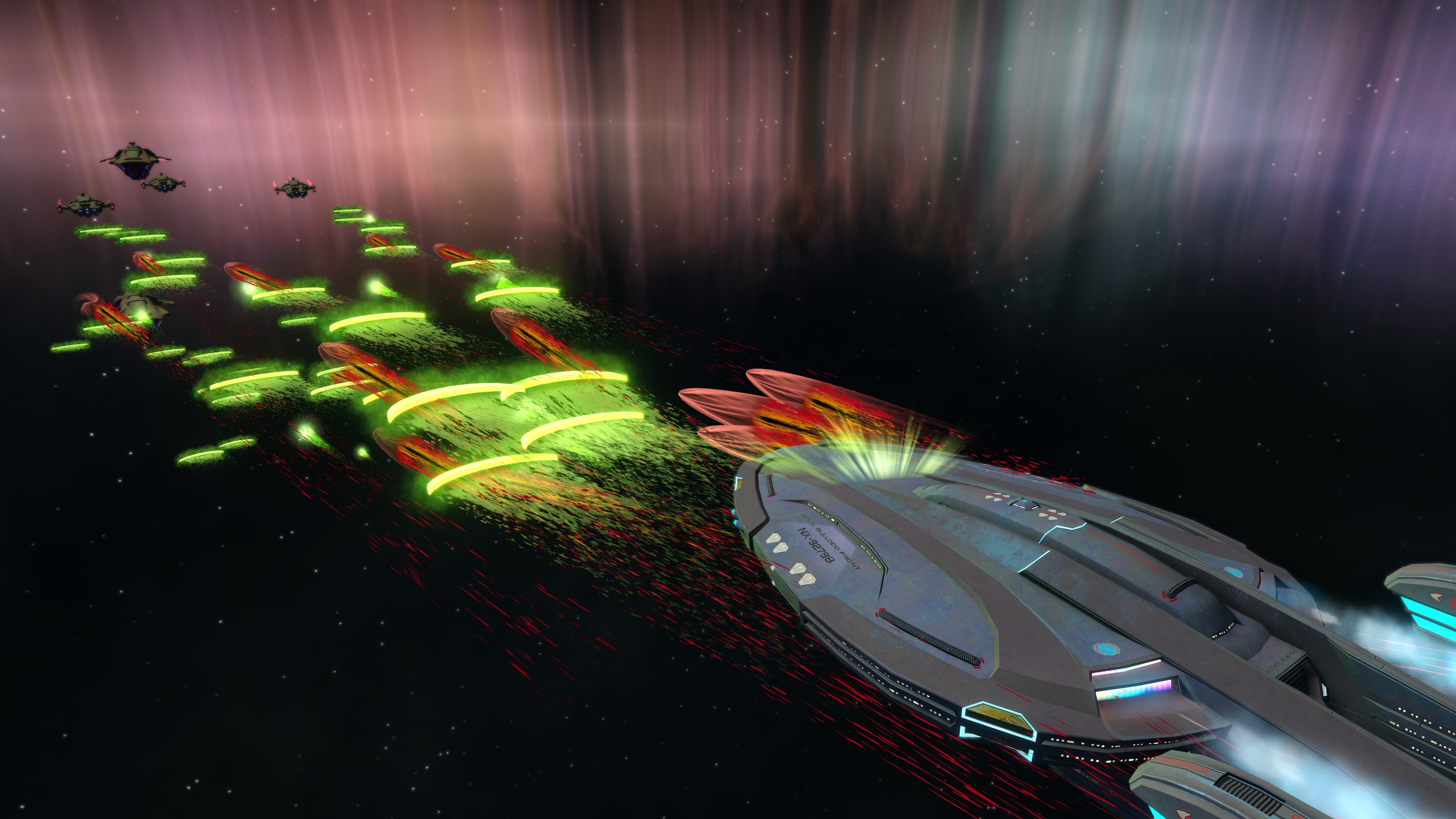 there are many reasons not to use cannons on a cruiser. Just think about those “fun” Galaxy X Dreadnaughts with dual heavy cannons and just two tactical bridge officer abilities. But this fun build is different. It’s not the “fun” used to excuse bad builds or poor performance. No, it’s fun in the meaning of shredding NPCs like an angel of death. It’s able to do 110k+ in pug runs and should break the 300k barrier in organized split ISAs. And it really shines in those missions where you take on the enemy head-on. Here’s the build:

<<This>> is an older video from the ship in CSA, just to give you an idea of the gameplay. The current version is nimble as an escort and hits even harder.

Some explanations and in-depth details:

First of: The Arbiter is ugly. Really ugly. Better use the Avenger skin. It will definitely improve your performance, too.

This build uses several items that are almost mandatory:

I’ve put Photonic Officer 1 on the build to reduce the cooldowns of the bridge officer skills. Running a competitive engine and using Tactical Initiative and the Temporal Negotiator should be more than enough, so you might ditch PO1 for an offensive skill like Vortex 2, TBR or Tykens. If you’re using a Sci or Eng Captain, it might be a good idea to use Reciprocity instead of Standoff (which is just a filler). Shield Overload, Improved critical Systems or any other trait that boosts your damage will work too.

It’s almost the same setup that I use on my Sheshar. Nukara shield and deflector and Prevailing engine. Please use the link to get more information. Running eight energy weapons it’s better to use a Spire core instead of the Terran one.

Supremacy (Astika), Emergency Weapon Cycle (Arbiter) and All Hands on Deck (Presidio) are well-known Traits that we use for our DPS builds for ages. Withering Barrage is mandatory. The 5th trait is yours to choose.

I really like Elachi crescent cannons. The look awesome and that’s only the reason I’m using them. My build consists of the Terran DHC (best cannon in game), a wide arc disruptor DHC (crafted), the Elachi Heavy Cresent Cannon (200 Lobi) and two Elachi DHCs in the front slots. If you want to replicate the build, you may also use the Terran plus 4 crafted Disruptor DHCs (Dmg/CrtD/Pen). But both wide arc (90°) and Elachi Heavy CC (180°) have a slight edge due to their wider firing arcs.

I use the Trilithium-Enhanced phaser turret, the Heavy Bio-Molecular Disruptor Turret (Counter Command Rep) and the Kinetic Cutting Beam. If your character is an engineer you may use another turret instead of the KCB. Nadion Inversion really helps against weapon power drain.

Both Bioneural Infusion Circuits and Weapon Sensor Enhancer are expensive Lobi consoles. The BIC gives you a minor boost to disruptor damage and shield capacity when used with the Heavy Elachi CC. The WSE adds +40 accuracy which nets you 5% CrtH and +20 CrtD by accuracy overflow. Sadly this console does not work with Fire At Will…

Hydrodynamics from the Counter-Command reputation itself is a great console for mobility but also gives a decent bonus to phaser and disruptor damage when used with the Heavy Turret. Plasmonic Leech, Temporal Entanglement and Assimilated Module are well-known meta build consoles. But both Plasmonic and the Borg Set are debatable. If your captain is an Engineer, drop both. If you’re using Supremacy as a starship trait, Plasmonic isn’t really needed. Some good alternatives are Disruption Pulse or Secondary Shield from the Synergistic Retrofitting Set because they add a bonus to disruptor and phaser damage. Dynamic Power Redistributor Module is one of the best consoles in game. But quite expansive for Feds. Delphic Tear, Tachyokinetic, Nausicaan Siphon are also good choices.

The four +Cannon Locator Consoles from the spire are no real surprise, too. Don’t even think about running Exploiters on energy builds.

With those consoles it’s easy to boost your crit chance to crazy levels (for a fed at least):

3 superior Romulan operatives, 1 Krenim or Nausicaan (T4 Diplomacy) and the Hierarchy for Science. The tactical skills are pretty easy to choose. Take the highest level of Scatter Volley, Override Subsystem Safeties, add Attack Pattern Beta 1, Kemocite Laced Weaponries, Focussed Assault for targets with many HPs, and Distributed Targeting. DT sucks, but actually, there is no real alternative. You could use Intel Team or a torpedo skill to trigger Inspirational Leader.

So if you’re tired of beams, just give it a try. It’s fun. And it also works great on Scimitars, Vengeance Intel Dreadnaught, Acheros or any other Cruiser or Warbird with a 5/3 weapon layout.

I use a slightly different setup for split runs:

All Hands on Deck was replaced by Improved Feedback Pulse to add more CrtH & CrtD. Sci Skills were Subspace Vortex 1 and Feedback Pulse 1. 3 Damage Control Engineers, 2 Energy Weapon for CrtH and CrtD and Dlyrene were my DOFFs.

Feel free to ask questions under comments or in game.